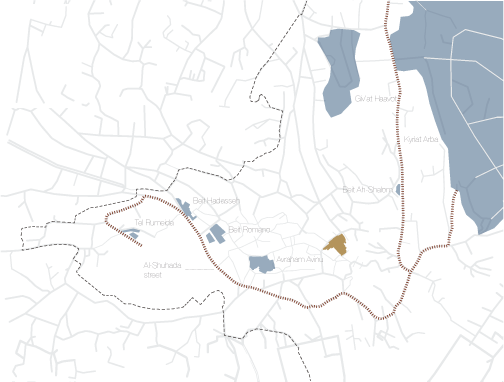 The scheme shows the settlements built inside and near the Old City of Hebron and the road belt that connects them.

Living compounds for Israeli civilians built on territories occupied by the Israeli state. Settlements are considered to be in violation of Article 49, paragraph 6 of the IV Geneva Convention of 1949 stating that "the Occupying Power shall not deport or transfer parts of its own civilian population in the territory it occupies".

Currently settlements exist in the Golan Highs, East Jerusalem and the West Bank. Earlier they were also built in the Gaza Strip (evacuated in 2008 as part of Israel's unilateral disengagement) and in the Sinai (evacuated in 1979 following Israel’s peace agreement with Egypt).

Israeli settlements are a vital pillar of the Israeli structure of occupation since the 1967 Six-Day War. The division of West Bank territories by settlements and roads connecting them serve two main purposes for the Israeli policy: to facilitate life of settlers creating small enclaves treated as part of the Israeli state and fragmentize Palestinian land making it easier to control.

The planning of settlements serve strategic and national agendas. The shape and the size of settlements depend on site morphology and the extent of available land. Each is divided in equal, repetitive lots for small private roofed homes. The gated compounds are heavily protected by fences, cameras and soldiers. Public functions are generally located in the inner part.

There are different reasons why Israeli citizens move into settlements. Among the two most common ones are: quality of life (higher quality of life is a direct result of government subsidies and investments in settlements) and ideology (strong belief that Jewish community is the righteous owner of these lands, which is rooted in Zionism). The settlements are mainly funded by the Israeli government and fundraising organizations from the United States.

The specificity of the Hebron settlements lies in their location. They are the only compounds structured inside a Palestinian city, which requires a particularly detailed control of the Palestinian population living around them. This need led to the creation of the whole apparatus of control structured from numerous smaller architectural elements connected by a complex infrastructure of roads. All Hebron settlements are linked by a road belt, where neither Palestinian cars and often pedestrian movement is allowed. Bus line 160 operated by “Egged Buses” connects Hebron’s settlements all the way to Jerusalem.